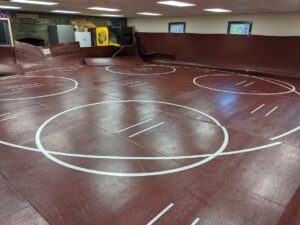 Sunfox Campground utilizes our Rec Hall in the off-season to offer youth wrestling to local students in grades 2-8.   This program is being run by Dave Nowakowski, former high school and youth coach, and current tournament director and member of the CIAC wrestling committee.  The primary program is being offered through the Town of Lisbon Rec Program (see below), with additional options through USA Wrestling of CT to join the Sunfox Wrestling Club and participate in local and state tournaments. 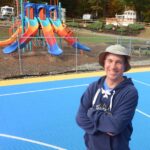 Where: Sunfox Campground Rec Hall (15 Kenyon Rd Lisbon).  Please drive slowly through campground and neighborhood.  Parking available on campsites located past the office/rec hall building (down hill, either side of road)

Wrestling provides athletes a chance to improve balance, strength, flexibility, self-confidence, mental toughness, fitness, discipline, teamwork and work ethic. Unlike many sports, any size or body type can wrestle, as there are weight classes that promote competition against similarly sized opponents. For more general information on wrestling, there are numerous websites explaining the basic rules and techniques.

For more information on this program, please call Dave Nowakowski at 860-705-2629 or email any questions to dave@sunfoxcampground.com.  See our Facebook page under “Sunfox Youth Wrestling” Also, a “teamsnap” type group will be established to update parents about any weather cancellations or changes.  There will NOT be any “group text” formed, as they are terribly annoying.

Lisbon Youth Wrestling Registration Form—You may either copy and paste the info into an email to dave@sunfoxcampground.com, or you can print it out and bring it with you to registration night (Nov 18 from 5pm-6:30pm) or you can mail it with a check to “Town of Lisbon Recreation”.  For easier printing, you may wish to use this PDF form link  (use 2-sided print option) Sunfox Youth Wrestling

Parent signature above constitutes waiver, releasing Town of Lisbon, any associated coaches and host location of Sunfox Campground LLC from all liability for any injury or accident that may occur during course of this program.
Please mail this portion of the form, along with registration fee to:  Dave Nowakowski  15 Kenyon Rd Lisbon  CT  06351 (check may be made out to “Town of Lisbon Recreation”), or bring with you to your first practice.

Additional options: Those interested in additional instruction and local or regional tournaments should consider joining USA Wrestling ($46/season).  Membership is required to attend tournaments (other than our free event limited to our participants).  See www.usawmembership.com to enroll. If enough wrestlers get their USA cards, we will attempt to schedule a match or 2 against other local schools/clubs.  Numerous private wrestling clubs are offered in the region, and we will offer one additional session starting in January for those who wish to enroll in USA Wrestling (either Monday, Wed or Fri, varying from week to week based on interest, availability and local high school schedules), as well as a one month extension of the season through Feb 25, 2022 with 1 class per week.  Please note that local tournaments are typically conducted on Sundays, and are not recommended for first year wrestlers unless it is a NOVICE event. Your child’s USA card does not cover the cost of these other tournament entry fees.

Any parent with wrestling experience is welcome to assist with the Lisbon Rec clinic and practices, but if coaching with the USA Wrestling sessions, or if looking to coach at any tournaments, you will be required to complete a free USA wrestling Safesport course, get a wrestling leader card ($52/yr) and a USA wrestling background check ($30 every 2 yrs).

Any cancellation/postponement due to weather (snow or bitter temperatures below 20 degrees) will be announced by 3pm.  Guest instructors may make appearances, including current and former high school coaches and collegiate wrestlers, such as Rey Santiago, Brock Coutu, Greg Perry and more.

The calendar below will show practice times and dates, as well as local high school home matches for Griswold and NFA (in case you want to watch a match), and local CT USA Youth Tournaments on Sundays (not encouraged for first-year wrestlers, unless listed as a “novice” event, and USA Wrestling card must be purchased for tournaments, with advance registration required).

If entering USA wrestling tournaments, the following age groups are used:   Division Names will be 6U, 8U, 10U, 12U, Middle School

The following information represents a variety of proposals intended to increase the overall appeal of wrestling, increase the action and simplify scoring.  These views are mine, and may not represent the opinions of USA Wrestling or the CIAC wrestling Committee, and have nothing to do with our youth wrestling program, so unless you are a serious fan, it it probably too much information.

In addition to posting my thoughts on revitalizing HS wrestling to various message boards such as “Pin to Win”, “MassWrestling”, “ConnWrestling” and “The Mat”, I will summarize the ideas here as well.  The following ideas are based on an attempt to increase action, increase & simplify scoring, increase participation, reduce forfeits and increase fan interest.  Some are original, others borrowed (or modified from those such as Wade Schalles), and some are concepts that have appeared on annual surveys or as forum suggestions or comments.

Even for devoted fans, too many matches are boring.  Low scoring, trying to keep it close and often going to overtime with a 1-1 score.  There must be more of an incentive for each wrestler to score, and this is partially addressed in the “team scoring” later, but scoring that rewards takedowns and nearfalls is a start.

1. Implement 4-3-2-1 scoring.  This simplifies scoring for all involved (wrestlers, coaches, refs and fans).

a. Takedowns are worth 3 points.  Action on your feet needs to be encouraged.  In addition, those who are superior in neutral are often only gaining a small advantage if electing to release the defensive wrestler.  If you take down your opponent twice, opt to release him and then cut him free from the bottom to start the 2nd period, you have been rather dominant but only lead 4-3.  Your foe may be allowed to counter and stall his way into a match that is tighter than it should be.  While there are some who advocate only the FIRST takedown being worth 3 points, I believe that relative to other scoring, ALL takedowns should earn 3 points.

b. Reversals are worth 2 points.  No change to this scoring. However, by increasing takedowns, more bottom wrestlers will look to score escapes rather than reversals.

c. Escapes are worth 1 point.  There are some who believe that an offensive wrestler should not have to give up any points when “cutting free” a defensive wrestler.  However, with the 3-point takedown, the escape point should remain.

d. Nearfall are worth 2-4 points (2 swipes of referee’s arm earns 2 points, 4 swipes/seconds earns 3 and 6 earns 4).  Simplified back points, ranging from 2 points for a 2 count, to 4 points for a 6 count.  Some have proposed per swipe, but that near of an increment becomes too much of a debate regarding ref counts.

e. Penalties simply progress from 1-2-3-4-DQ (same for stalling).  Completely separate penalty points and stalling points, with first offense 1 point, 2nd offense 2 points and son on…up to 4 points.  A fifth violation would be a DQ.  For stalling, the same point scale…but may retain the caution for first offense (which must be more willing to be awarded early, as opposed to just for show in the last 10 seconds).

f. If college maintaining riding point, should only be awarded if near fall has been earned.  Although personally against any riding points, college tradition would have some resistance eliminating this form of stalling…so at least make it earned only if the wrestler with the 1 minute advantage has earned at least one near fall.

d.  A forfeit becomes 7 points.  Too often, wrestlers are bumped away from other good wrestlers.  This would be in conjunction with “locked line-ups” and only applies if a wrestler is listed on the line-up and that weight is subsequently forfeited (not having a wrestler entered in the line-up for a weight class would be a traditional 6 point forfeit).

e. For tournaments, eliminate advancement points and simply award team pts as shown (2.2 to 6.0 pts), with consi bracket points cut in half, maintaining placement points.  Byes (when followed by a win) would be worth 2 points on championship side and 1 point in consi bracket.

1. Increase all weight classes by 2 pounds to allow for uniforms, shoes, headgear etc.

2. Procedures will vary slightly based on dual meet (or multi dual) and individually bracketed tournaments

A. Locked Line-Up: Require each coach to submit a locked-in line-up to the official 10 minutes prior to start of dual, just prior to any introductions or playing of National Anthem.  Rationale: a coin toss should not have such an impact on a dual meet result, and forfeits and ducking of quality opponents will be reduced.  Referee will present line-ups to the head table to be entered into scorebook and for introductions.

B. Weigh in when reporting to table ready to wrestle (scale available prior, including during warm-ups, to check weight).  Referee will supervise each weigh-in at the head table, confirming weight of each wrestler.  Option for headgear to be included or put on after weigh-in as proceeding to center of the mat.

C. For a dual-meet team tourney or multi dual, a wrestler can’t compete in more than 2 different weight classes for the event.  Wrestler may compete in class for which qualifies OR may wrestle up 1 (one weight class) above which initial weigh in of the event allows.  Ex:  Wrestler A makes 132 for first dual.  This allows him to wrestle 132 or 138 during event, provided he makes weight for subsequent rounds.  If he does not make 132, he may still wrestle 138, but MAY NOT then wrestle 145.

E.   If wrestler who is listed on lineup for that dual does not get sent out to wrestle, either by failure to make weight when called matside, or by removal from line-up by coach, it is a forfeit and that wrestler may not wrestle at a higher weight class in that same dual.  That wrestler may not be replaced by a teammate–it is a forfeit resulting in 7 team points for the opposing team.  Wrestlers will adjust to wrestling at a weight class for which they are best suited, as they will need to actually wrestle at that weight (as opposed to weighing in at that weight and actually competing at a significantly higher amount).

A. Initial matside weigh in prior to first round matches (including all wrestlers receiving byes).

C. Weigh in to take place matside.  Scales at each mat if possible, or between mats if not enough scales available.  Wrestler failing to make weight on designated scale may make 1 attempt at each other available scale.

D.   Any wrestler failing to make weight for first round is considered a scratch (entered as a “forfeit”), and is deleted from the event.

E. Any wrestler failing to make weight for the semifinals (or corresponding consi round) is considered a forfeit.  Team does not lose all points earned for that wrestler, and wrestler may continue in the tournament if same weight is made for next round (even if that round would not have required a weigh in).  Ex:  Wrestler B fails to make weight for the semifinals.  He drops down to the consi semis, and must make the same weight he was required to make for the championship semis in order to compete in the consi round.