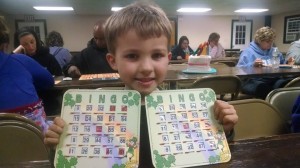 Family Bingo at Sunfox is for all ages, although young children should be accompanied by an adult.  Bingo lasts approximately 90 minutes, including the “regular” session and the “high stakes” component. Card sales begin about 15 minutes prior to the posted start time. We offer two different types of Bingo cards. Our $1 cards are good for the first 8 to 10 games of Bingo (lasting about an hour), while our high-stakes cards are $5 each and are only good for the 5 “high stakes” games at the end (about another 20 minutes). You may buy as many cards as you like—some people play just 1 card, while others may play 8 of the $1 cards and 4 green cards or more.   All of the money that is collected is distributed as prizes.   See details below (specific games subject to change, with a few crazy games, such as “Flip Flop Bingo” or “Close Enough Bingo” mixed in for good measure).

Fewest Calls for the “Fill Your Card” Cover-All (Black-Out)–Break our record and win a Sunfox Sweatshirt!: 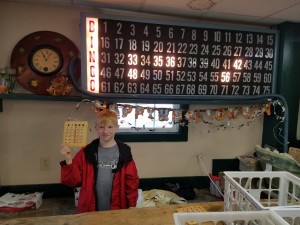