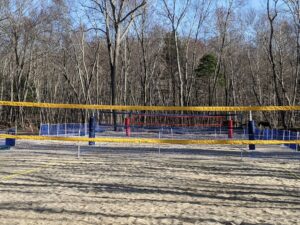 Sunfox added 3 beach volleyball courts, and in addition to utilizing them for our campers, we also offer a summer league for co-ed adult teams on Tuesday evenings, as well as court time, instruction and games for local high school athletes on Mondays and Wednesdays (see below)

Welcome to the 5th season of this league!  We’re thrilled to be able to provide you with this opportunity to gather with friends new and old and play this great sport!  We encourage your feedback as we strive to make this a positive experience for everyone involved and hope this is just the 4th of many seasons to come!  Play hard ~ but most importantly ~ Have FUN!!

PLEASE NOTE: We have officially moved our entire league to Sunfox Campground.

PARKING –You may park on the stones right next to the courts, along the stream beyond the courts, and where the old courts used to be.

PLEASE NOTE: We are guests to this campground! Please keep the speed down to a minimum when driving through the neighborhood and into the campground. Please be mindful and respectful of this, as repeat offenders may be excluded from play.

* The cost per team to participate for the season is $150.00 for up to 8 players.  Additional players added to your roster at a cost of $10/player, while subs must pay $5 per day they play.  We also welcome non-committing players to be part of the “sub pool”, allowing them to play for any team any night (but ineligible for play-offs unless added to roster and having played in at least 1/2 of scheduled matches for that team).

* Each player must complete and sign the registration/waiver form before stepping on the court.

* Players of age 14-17 years who will have completed 9th grade in 2023 will be allowed to play provided their parent or legal guardian has signed the waiver.  Additionally, a responsible adult representing the player must remain on-site either as a player or spectator, otherwise the underage player will not be eligible to participate.

* Team Captains – Complete the team registration form and fees register and return with all fees collected by Tuesday June 13th, 2023.  Include signed waivers for each of your team members.

* Matches will be played on Tuesday evenings through the summer (May 30-Sept 5, excluding July 4th)

* Storm night cancellations will be made by 5:00 with notifications made to Captains via text message and/or email.

* Canceled matches will be added throughout the season on open courts or at the end of the season if needed.

* Season schedules will be emailed to each Captain.

* Players must compete in a minimum of ½ of the regular season to be eligible to compete in playoffs, although players can be added to a roster throughout the season with payment of applicable fees.

* Sub-pool players can compete in more than one match per night.

* Sub-pool players ARE NOT eligible to compete in playoffs unless they have become a permanent member of a team and have met the minimum of ½ of the season requirement on that team’s roster.

* If both Captains are in agreement, a forfeit may be avoided by rescheduling a match if an open court is in fact available that evening or on another compatible date.

* A scorebook will be at each court.  Captains must sign each team player in.

* Home team is the first team listed on the score sheet and has the choice of serve OR side.

* Captains are to record each game score in the corresponding book.

* A copy of each player’s emergency contact information will be in each scorebook and/or all contacts will be kept in a binder on site.

* To minimize team costs, matches will be self-officiated and self-scored.  “Do-overs” are encouraged to avoid conflict on a judgment call.

* The score is to be called out verbally by the server before each serve, noting “Game-Point” when necessary.

* At the completion of the match, both Captains are to sign the score sheet to confirm that the attendance and the match scores are accurate and true.

* League standings will be determined by 1) Wins, then 2) Point Differential.  In the event of a tiebreaker, the head-to-head record of the teams will be used.

* Standings will be maintained by the league director and posted weekly in each scorebook and an email will be sent to all captains before the next week’s game.

* A minimum of 3 and a maximum of 6 players can be on a court during active play.

* The point a player may rotate in is at either the service position or entering the front row.

* Late arrival players may enter the game as follows:  5th, or 6th player(s) arrive; they must enter in the back row to the left of the server.  7th or greater player arrives; they can enter at either the service position or the front row only if a complete rotation has not occurred.

* If a full rotation has occurred with a full team of 6 on the court, said late arrival player must sit out until the next set.

* A female player must have at least 1 offensive touch on the ball if 2 or 3 touches are made.  Defensive block does not count as a touch.  Violation results in side-out with point awarded to opponent.

* There is no service rotation on the first side out.

* During an attempted serve, a ball; having not been touched, may be dropped to the ground allowing for a second attempt of a serve, but only once per serve rotation.

* If an environmental factor has been determined to be a hindrance – i.e., sun in the eyes – the teams will switch sides of the court at the point in the game when either team has scored an accumulative of 10 points.

* The action of an attack or block on a serve is a violation and will result in a side out.

* One 60 second time-out will be allowed per team per set.

* A basic first-aid kit with Band-Aids and ice-packs will be on site.

Round robin regular season of 11 weeks (play all 11 teams)

Practice night on May 23 (captain’s meeting 1 week prior)

On Monday and Wednesday evenings, from June 26 through August 16, local high school volleyball players (boys and girls age 13-18 who will be entering grades 8-12 in the fall of 2023) are invited to join us for instruction, drills, and scrimmage/games.  18U, 16U and 14U.

Scrimmages/Games:  From 6:45PM until 7:30PM, the courts will be utilized for games.  Some sessions will involve random team assignments, while others will group players with their school teammates.  A mix of 6 v 6, 4 v 4 and 2 v 2 beach may be played.

Cost:  A waiver of liability must be signed by a parent or guardian prior to any play.  Options include a full season pass (8 weeks) for $160/player or a pay-per-day fee of $20.  Enrollment will be limited to 50 players, with preference given to those who sign up for the full season.  Come as often or as little as you wish, but please be on time.  Players who show up later than 6:30pm and miss the instructional session will be charged double.

PARKING –You may park on the stones right next to the courts, along the stream beyond the courts, and where the old courts used to be. Carpooling is encouraged, and parents are also encouraged to stay and watch.

PLEASE NOTE: Please keep the speed down to a minimum when driving through the neighborhood and into the campground. Please be mindful and respectful of this, as repeat offenders may be excluded from play.